Water consumption in agriculture and industry 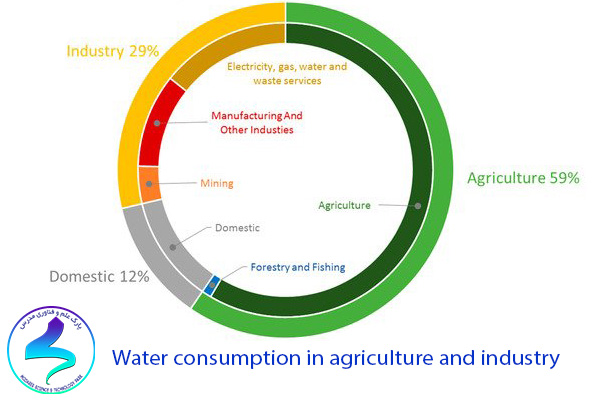 Water consumption in agriculture and industry

The most consumptive water use in the world is allocated to agriculture. As the world population is rising, the demand for food and the amount of agricultural production is increasing day by day meanwhile 10 percent of the population are not in a good situation and there is no such thing as food security in some regions in the world. So many villages are facing poverty while agriculture is the main way to live for them. Reusing sewage by applying safe water treatment brings so many benefits to the society, environment, and human health. Based on statistical forecasts, from 2000 until 2050, there will be a 400 percent increase in production and a 140 percent increase in making electricity which is all because of the rise of global demand for water. Annually there are so many reports of companies that incurred a great loss due to water-related disasters. For instance, in 2018, companies incurred 38.5 billion dollars lost because of water.

The world population is increasing and we need more food, so the production in agriculture is growing too. Ten percent of the world population is facing food insecurity. So many people in the world don’t have the access to a suitable amount of food individually. This shortage is sharpening and the outbreak of COVID-19 and its economical consequences made the situation even worse. 60 percent of the food production is through agriculture and farming. 80 percent of crops are produced through dryland farming. Between 1996 to 2005 more than 7 thousand cubic kilometers of water were used to produce crops. This amount is 92 percent of the whole consumption water at that time. Despite all of

this and the international developments, every day thousands of people are dying of hunger. In so many regions people living in hunger and poverty and 80 percent of them is a villager.

As we said, agriculture and farming especially irrigation has a significant role in water consumption, and almost 40 percent of the irrigation is done by using groundwater. 40 percent is not a low number so the necessity of powerful management and strict rules to manage the amount of water ground usage.

Wastewater is the second important subject after water consumption. Wastewater and sewage treatment are two vital issues in our world. Using the treated water in agriculture is so advantageous for both human health and the environment. The annual produced amount of sewage water was estimated at about 380 Cubic kilometers. If these amount of wastewater accomplish the sewage treatment process, millions of hectare of lands can be watered.

In 2014, about 10 percent of water was allocated to generate energy but only 3 percent of it was used.

They also considered the same amount, 10 percent, for other industries.

Based on statistical forecasts, from 2000 until 2050, there will be a 400 percent increase in production and a 140 percent increase in making electricity which is all because of the rise of global demand for water. Also based on studies, scientists forecast the increase of using industrial water by 2030 which is 2 times more than what we using today.

Annually there are so many reports of companies that incurred a great loss due to water-related disasters. For instance, in 2018, companies incurred 38.5 billion dollars lost because of water. This number can be higher because there have been companies that were not able to report the numbers.

Water consumption is allocated to three parts: Agriculture and farming, Industry and energy generation, and the last one domestic consumption. The most water consumption is allocated to agriculture and farming but the point is the least portion of agriculture in GDP which shows the low added of water in this field. Generally, farming’s portion in Gross Domestic Production in different countries of the world is 4 percent. By using sewage treatment we can irrigate millions of hectares of land. Sewage treatment brings so many benefits to human society and also the environment. These are the reason why sewage treatment became so important and safe way of doing it.